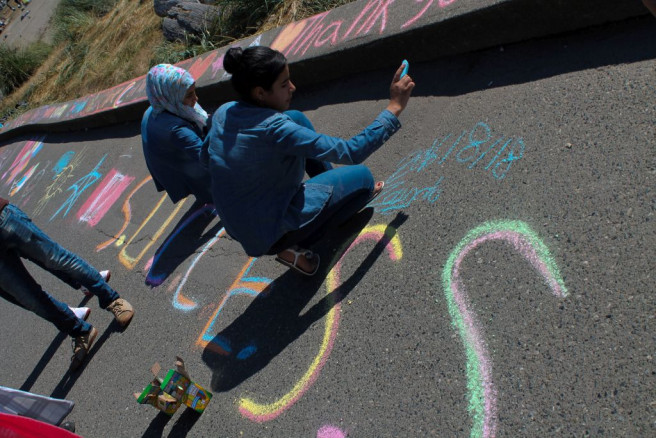 The S.U.C.C.E.S.S. Surrey ISIP Team organized an outing to English Bay in August for newcomer Arabic-speaking youth who arrived to Canada under refugee status.  Ten youth participated in this outing and were offered the opportunity to establish new social connections as they toured downtown Vancouver, as well as the English Bay beach.  Although it was a hot day, there were no complaints to be heard about this event. Organized ahead of time, several local restaurants donated food and drinks to keep the youth fed and hydrated throughout their tours. During the afternoon, the group of youth cooled down playing in the Pacific ocean. To get youth engaging with the Vancouver community, S.U.C.C.E.S.S. staff provided chalk and facilitated an activity that involved the participating youth writing positive messages on the boardwalk. Some of the messages thanked Canada for welcoming them into the country, while other messages spoke of the beauty of their home countries. Many local residents stopped and engaged with the youth to offer encouragement and recognition of the inspiring messages and artwork left on the boardwalk.